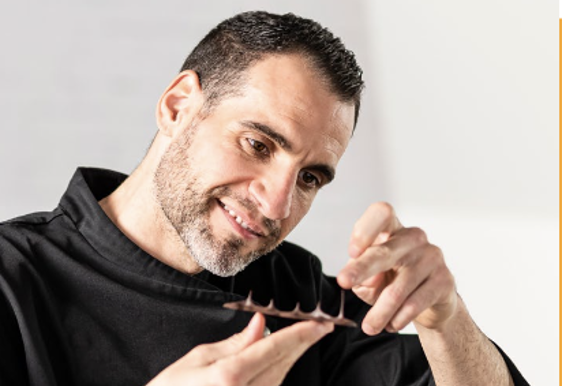 Veliche™ has just presented, through an exclusive launch, its first range of Signature Origin chocolates.  This includes two dark couverture chocolates, Usulután 65, from El Salvador, and Okapi 65, from the Democratic Republic of Congo. Pastry chef, David Redon, worked alongside us as we developed this new Veliche Signature Origins chocolate line. Having been particularly involved with Usulután 65 from El Salvador, he describes this chocolate as “distinctive through its strong character”.
Could there be anything better than making this chocolate the heart and soul of our various creations, refining it and then discovering its many flavours? So, take this gourmet journey and discover Usulután 65.

“Usulután 65 comes directly from El Salvador, and is part of the new Signature Origins range from Veliche. This new line makes it possible to create more distinctive chocolates. Usulután 65 is a chocolate with character, yet is subtle at the same time.  It offers a harmonious blend of woody and fruity notes, is easy to use and will bring added value to the creations of every pastry chef.” 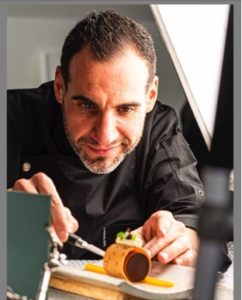 “Usulután 65 is also interesting to work with because its composition lends itself to so many uses. It actually offers a great amount of fluidity for use in various chocolate applications, such as for moulds or coatings. It also contains 65% cocoa, giving the chocolate a great balance of bitterness and sweetness and, finally, it gives off an intense aroma, bringing a flavoursome and charismatic originality to the outcome of any recipe.”

“I had to work on this chocolate to bring out some of its tastes and characteristics. I used it as a component to either fix a flavour or to bring in some texture. Examples of this were for the crémeux gingembre (creamed ginger), and for the white chocolate, Obsession 30, used to provide smoothness along with a gourmet and dairy note that is specific to white chocolate. On the other hand, Usulután 65 was used in a more basic way, in order to emphasize the properties of its flavours, and this is precisely what we would expect from an original chocolate!” 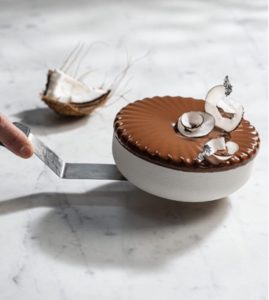 “For Dark Coconut I used mainly pure Usulután 65, in order to play on that dark chocolate intensity, which comes through every part of my dessert. I then paired this with the sweetness of the coconut. Intense 35 milk couverture chocolate in my crust allowed me to balance the texture. And finally, Obsession 30 white chocolate serves as the main ingredient in my spray gun, which, combined with the fluid texture of cocoa butter is how I achieve my white velvet effect, without affecting the final taste of the dessert.”

You can find more recipes in the Inspiration section of our website!

A crispy moment with Maarten Jordaens

Get the latest insights to help your business fly

Get the latest insights
Gérer le consentement aux cookies
We value your privacy - We use technologies such as cookies in order to optimize site functionality, integrate with social media, allow us and third parties to serve relevant advertising when you visit our site and other third party websites, analyze our traffic and site performance and improve and customize your experience on our websites.